This Bose SoundTouch provides a compact solution with modern connectivity to a variety of music libraries. But how does it hold up?

I would have liked more music services offered, such as Rhapsody, Google Play Music, Slacker and SoundCloud. As a workaround, you can connect your smartphone or tablet via Bluetooth and play those services through your device, but you can’t connect to them directly with the Bose SoundTouch internal functionality. This means you won’t be able to assign these to buttons on the device for quick-play.

Music services it does support:

You can also add music that is on your own home network using your computer’s iTunes or Windows Media Player. Additionally, there is the ability to add a network attached storage NAS drive. I added my music through the Windows Media Player and created some playlists, but came across two issues: 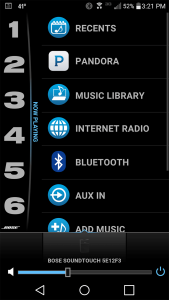 Both the mobile app and computer program are very similar. The user interface, layout, and control options are mostly the same. You can turn the Bose SoundTouch speaker off and on (assuming it’s in standby), add music sources, and browse through your libraries. It was a bit buggy at times, occasionally disabling the scrolling window in the Android app, and like I said, the issues with it staying connected to my network library on the PC. It takes a bit of playing around to get used to the interface — it isn’t as user friendly as I’d like — but once you get it down it works pretty good.

While setting up the device initially takes a bit of time — installing software/apps, connecting to Wi-Fi, creating and signing into accounts, assigning the preset buttons — using the device is actually quite simple. My wife, who is less tech savvy than I am, was thrilled when I showed her that all she needs to do to start playing her Pandora station was to press the #1 button. And #2 for Disney station for our daughter. She hates the complicated setups I have used before, such as having to turn the TV on, then the Blu-Ray player, then navigate to the music menu, then select the music service, then wait for it to log on, and then navigate to her music list. Bose really took out the complication when it comes to everyday use. Very simple, easy to operate.

Bose makes the statement that they strive to reproduce the musical sounds as closely as possible to those of the original performance, and that, while manufactured “flashy” sounds may be initially attractive to the novice, they are not real and enduring. By “flashy” they are likely meaning equipment that increases the richness of the bass and crispness of the high notes. I agree that they are staying true to this statement. You don’t get really deep or punchy bass nor do you get really crisp notes, but for the size of the unit you do get pretty balanced sound. There’s no rumbling walls, but the sound is smooth and pleasing. If you put the speaker in the corner, the sound waves bounce around the room better and is more deep and rich. It also volumes up fairly loud; loud enough to be heard throughout most the household (and there is no distortion when maxed). This too, for my wife, is good because she always complained about my sub-woofer and tweeters. It wasn’t until I got towers with good mid-range speakers that she was happy. The Bose SoundTouch pretty much achieves this type of middle range quality.

The small size is great for saving space, and the plastic Bose used feels sturdy and solid. Not cheap. The bottom is covered with a thin layer of rubber strips, which makes this speaker good for glass surfaces and prevents it from hopping around should the volume be cranked. The buttons on top are also rubber — soft to the touch and easy to press. The rubber they used isn’t that cheap soft-plastic you sometimes find on devices that crack and wear out over time. These are well made with longevity in mind. The remote control uses this same soft, but durable rubber. Feels good to the touch and the print on the buttons is large enough for those with poor eyesight to see.

Overall, I would have given the Bose SoundTouch 5 stars if it wasn’t for their limited selection of music services and connectivity issues with my music server. They got the size right and the build quality. It would have been nice if they added an internal battery for mobility, but I’m sure they wanted to keep the size down which is why it only works while plugged into a power outlet. Since my main gripes are software based, I’m hoping Bose keeps updating the apps and software by adding services and increasing stability. In the end, this is a great device for those looking for more spacious and simple solutions.