Petronics ( https://www.petronics.io/ ) has stopped production of the Mousr. It is no longer available for purchase and they have removed the app that controls the mouse. Thankfully I was able to find this out before resetting my phone, and so I made a backup of the app. If you still have a working Mousr and need the app, you can grab my copy. Click the link below to download the Mousr app for android:

I have one cat, and she’s a very smart cat. Which means she gets bored easily. At 2-years-old, she’s also very playful. Her favorite game to play is fetch. Yes, fetch. Like a dog. I throw a ball, she runs after it, and then carries it back in her mouth for me to throw again. As adorable as that is, it can get tiring. And I can’t always drop everything to play with her. That’s why I was interested in this Mousr—something that can entertain my cat while I’m busy with other things.

At first, I was dubious. Thinking it would be too mechanical to appeal to a living creature. After all, she hates the vacuum cleaner. While the Mousr doesn’t have a loud engine, the wheels do make a whining noise like you’d expect from a toy-remote-control-car. That doesn’t seem to bother her. In fact, she loves this toy. After the battery drained, she even waited by the charger for it to be ready to go again.

What’s in the Box 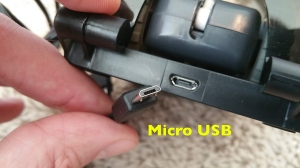 I find the battery lasts for about 30 minutes. That’s with continual play. It can go longer depending on the frequency of movement and other settings. The battery is a Lithium-ion, 220mAh, which is fairly small (my smartphone has a 3220mAh for comparison). Thankfully it recharges fairly quickly (about 15 minutes—but depends on your wall charger). The charging dock has a roof that snaps in place. This keeps the Mousr secure so your cat doesn’t knock it out and interrupt the charge. You do need to take the tail off for it to fit, and it doesn’t come with a wall charger. Just the USB cable. Which means you’ll need to purchase one separately, or use an existing one (you can also use a USB port from your computer). For reference, the dock uses Micro USB, which is pretty standard. Keep in mind you do not have access to replace the battery down-the-road, so that somewhat limits the lifespan of the unit. Granted, adding this option would have likely lowered the durability, so I understand why Petronics closed it off. 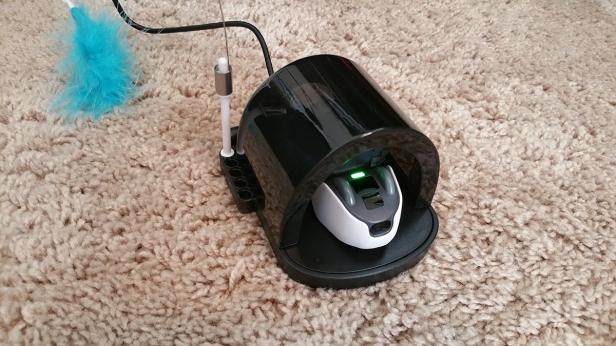 There are currently (as of November 2018) three (3x) auto play modes. (a) Open Wander, which explores the area around it. This is more for cats who like to watch but not chase. (b) Wall hugger, which explores near obstacles and walls. Encourages chase, but can more easily get stuck. (c) Stationary, which spins and bounces the tail in place while keeping a fixed distance. Less energetic play, but good for cats who like to sit and swat.

With my cat, I find I need to mix the modes up. Starting on one and changing to another when she loses interest. There are times I’ll switch it to manual mode and drive it around the kitchen counter for her to chase, or to initiate hide-and-seek play (the controls are really easy to operate.) But every cat is different. You’ll want to switch up the settings to see what he/she/they like(s) best. Advanced settings let you adjust the sensitivity of the speed, pause frequency, pause length, and toggle mouse-struggle when caught. I haven’t been able to gauge the struggle setting because my cat doesn’t play with the mouse itself. She’s only interested in what the tail is doing. 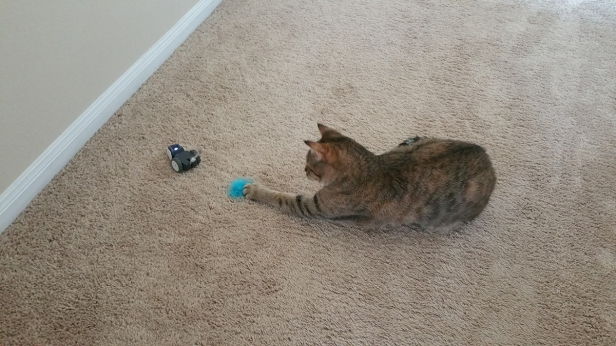 The first time I got the Mousr up and going, I was on the second floor of my house. I had it set to “wall hugger.” As a result, it eventually navigated itself down the stairs. There’s apparently no sensor to prevent it from taking a tumble. Thankfully there was no damage done to the Mousr and it even managed to stay on its wheels. The programming behind this robotic AI is brilliant. If on its side or turned upside down, it struggles and moves its tail in an attempt to get back upright. Same goes when the tail gets stuck on a chair leg. While it’s not always able to get free, most of the time it does.

As to durability, like I said, it survived going down my stairs. My wife also stepped on it by accident. So far, it’s held up just fine. I find the build quality to be really good. While the manufacturer claims it was tested with Bengals, Maine Coons, and Savannahs, they do warn you to keep it away from dogs. Dogs bite and chew on things and can destroy them with their teeth. My dog has no interest in it, but he’s older and not a hyperactive breed (he’s a 12-year-old Shiba Inu). If you have an interactive pooch, you may want to confine either dog or Mousr with cat during playtime.

The Mousr does make occasional noises. Some to draw the cat to it, some to signal that a change occurred, and some to alert the owner that it’s stuck and needs help. While I like the sound, it annoyed my wife, so I was thankful the app had an option to mute it. Personally, I wish there was a volume control so I could just turn it down rather than off. But perhaps that’s something we’ll see in a future update? The manufacturer claims they are constantly making innovations, and I look forward to seeing what else they come up with. There’s already talk about adding a feature called “All Day Play” that will hibernate the Mousr when it predicts your cat is done playing with it, and will wake the Mousr when your cat gets close enough. Sounds interesting.

A nice feature about it making noise is that it can help you locate the mouse—assuming the battery isn’t totally dead. On the app, click on the music note by the Mousr icon and the unit will chirp. You can click this as many times as needed until you are able to track it down. I had to do this once when the Mousr was in “wall hugger” mode and got lost in my daughter’s bedroom among a pile of stuffed animals. Worked great.

The Mousr comes with two tails:

You set which tail you are using in the app and it’ll adjust the play style to match the tail. So far, they survived my cat, but I can see the ends wearing out over time. If you are creative, you can attach a new end to either the wire or string once the factory one wears out. Or you can purchase the Big Tail Bundle separately. It comes with 10 tails and retails for $40. These tails come with more variety and even have a fully metal option (spring) that will not wear out.

The 10 tails this set comes with are:

You can control exactly how fast it goes when using the “Precise Remote Control” option in the app (there’s a slider you move with your thumb). Also, you can set the speed in the “Advanced Customization” options under “Auto Mode” (there are 3 speeds to choose from: slow, medium and high).

As far as setup goes, I did have some trouble. I am using an older Samsung Note 4 smartphone and came across two issues:

I emailed Petronics to help me with these issues and I kid you not, 10 minutes later they sent me a reply. Literally, I sent the message at 2:38 PM and got a reply at 2:48 PM. Notice the time of day. It wasn’t sent after hours from the other side of the planet. While the manufacturing is done in China, it’s a U.S. company (based in Champaign, IL); run by former electrical engineering Ph.D. students from the U of I. Needless to say the message was written in clear English and with good grammar. I was impressed with their support. Friendly, speedy, clear, professional and helpful. They are also happy to offer personalized play tips to match your cat’s personality and play style. Truly standing by their product.

One thing to note about the Mousr is that it will not work without initially connecting to the app. While you can put the device into auto play by double-pressing the power button, this feature won’t work out of the box. The reason for this is that the Mousr ships with special firmware that enables it to preserve battery during transit. Once you connect the first time, the software will automatically update to the latest version. From there you can set the Mousr into auto play without needing the app—it will remember the last auto play mode you used and automatically go to that. To change the mode, you’ll need to load the app again.

While my cat still seems to be more engaged with human interaction, this toy does a great job at entertaining her when I don’t have time. It’s well built, easy to operate, intelligent, and continues to get new options/updates from the manufacturer. Works good on both my tile and carpet. I do wish it came with a wall charger, ability to replace the battery, and that the app was less buggy when setting up, but these are minor complaints for the overall product you get in return. Since my cat would give the Mousr 5-stars, I do as well.

3 thoughts on “Mousr: the intelligent toy mouse cats will enjoy”