I acquired the Klipsch RSB-8 for my game room. It’s paired with an Epson Home Cinema 2040 projector. The soundbar sits on an entertainment center (so I didn’t wall mount it). My Blu-ray player plugs into the soundbar via HDMI IN (passes both video and sound), and the HDMI OUT goes into the projector. I’ve had no connection issues and everything is working well.

For comparison, I also own the VIZIO S5451w-C2. I have it in my living room attached to my 55 in LED Smart TV. I went with VIZIO here because I wanted the TV and soundbar to match branding. I also wanted a bar that was wide enough to look good with the TV’s 55” dimensions. The VIZIO S5451w-C2 is 42 ¼” wide whereas the Klipsch RSB-8 is slightly shorter at 40”.

Both soundbars have their own pluses and minuses.

The soundbar of the Klipsch RSB-8 itself produces a nice clean and crisp sound. There’s a quality to it that reminds me of Bose. While the VIZIO has really good sound of its own, I do notice that the Klipsch is a notch or two above.

The lack of rear speakers on the Klipsch lessons the spatial sound dynamics when compared to the VIZIO, but the virtual surround mode does a decent job of making up for it. With virtual surround turned off, the sound feels very forward and front heavy. With it on, the sound waves bounce around the room better and enriches the depth. I still prefer the rear speakers of the VIZIO, but it’s not a total deal breaker.

Let me explain why that matters.

1) Due to the smaller woofer of the Klipsch, I find it has less resonance. Meaning, you don’t get the deeper reverberating bass—the stuff that makes a loud explosion shake your room. That said, it makes up for this by providing a lot of punch. Pounding. The stuff you feel hitting your chest. Given its small size, I find it has a fair amount of power. The larger VIZIO woofer has better reverberating bass, but the punch isn’t as heavy.

2) With the Klipsch subwoofer pointed toward the ground, the majority of the bass gets pushed against your floor. While it does have an opening at the back to allow sound vibrations to escape, the majority of the thumping goes downward. Why does this matter? Because the type of floor you have can change the intensity. Since my game room is on the second floor, the bass gets pushed into the house’s wood decking (under the carpet). The wood itself vibrates and helps the bass to travel across the room and feel more intense. In my living room downstairs, the floors are concrete. Which means the bass of the Klipsch won’t be as effective (concrete won’t carry the vibrations as well). In that case, I much prefer the front facing woofer of the VIZIO; it shoots the vibrations forward and toward the seating.

I can’t even begin to explain how terrible/dreadful/awful the Klipsch’s remote control is. First of all, its surface is made from a type of thin, flexible plastic which bubbles up for the buttons. I’ve had experience with devices in the past that use a similar material for buttons. Every. Single. One of them. Cracked over time and the text/icons rubbed off. I put packaging tape over the surface to help prolong the life of the buttons, but doing so makes the controller look less than ideal. For the cost of this soundbar, I’m amazed at how cheaply this remote is made.

Second of all, its accuracy is shoddy to say the least. More than half the time pressing a button doesn’t change a thing. You have to lift the control and very deliberately point it as directly at the soundbar as you can for it to work. Sometimes I find it easier just to get up and press the buttons on the speaker itself. Problem is not all the buttons are available on the speaker. You can pretty much lower and raise main volume and change input selection. But if you want to activate modes (surround, night, etc.) or lower and raise the subwoofer volume, you need the remote. It’s extremely annoying. Thankfully you can program a TV Remote to control some parts of the soundbar. There are also codes for universal and cable remotes (RCA, DIRECTV, XFINITY, BRIGHT HOUSE, AT&T). But since I have a projector, and no universal, I’m stuck with it.

That and, it’s thin (making it easy to lose) and does not seat well (feel comfortable) in your hand. The remote of the VIZIO is much. MUCH. better.

Both soundbars fail to have a power button on the speaker itself. The Klipsch at least has *some* buttons on the device, and pressing them does wake it (though you can’t power it off). I just wish there was some way it would detect when sound is active and wake automatically. That, and I have no idea why it takes the Klipsch so long to turn off and on—there’s a 5-second delay between button press and activity. That might not seem so bad until you also factor in having to stand there 5-seconds to make sure the remote button actually worked. 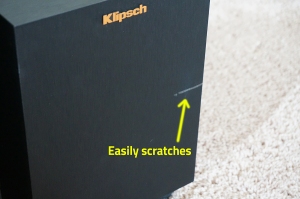 Another issue I came across was with the poor quality of the woofer box. I barely bumped it with the vacuum cleaner and now it has a large scratch that won’t rub off. The surface is covered in small lines that produce a slight texture, but these lines scratch and scar easily when rubbed horizontally. And because of the texture, I can’t just take a Sharpie to cover up the flaws.

Overall, I find the strength of the Klipsch is in its sound quality. Best for rooms with wooden floors, and for people who don’t care about deep rumbling bass. It lacks rear speakers and has a horrible remote control. For the price, I would have expected better response time and build quality. I find the VIZIO to have been more cost effective and a better bargain.