This is listed as a Woman’s watch, but in my opinion, I’d say it’s better designated as unisex, not male nor female specific. Typical feminine watch traits include small wrist size, thin straps, lighter strap material, and a small case diameter. While that’s not always true, I feel it important to note that this watch has none of that. I may have thin wrists compared to some men, but there is nothing small, little or dainty about this watch. I’m a 6’ tall 199lb man, and find the strap to be thick and heavy as well as large (had to remove 3 links to fit). The case diameter is nearly as wide (42mm) as my Emporio Armani Men’s ‘Luigi’ Casual Watch (Model: AR11025) (43mm), not to mention the band and case thickness are meatier. If you are a male, don’t feel like you’ll lose your man card by getting this watch. If you are a female, don’t feel like the watch would be a beast on your wrist.

Why? Because the Q Venture was specifically designed to be smaller (42mm diameter / 15.5mm thickness) than its sibling, the Q Explorist (46mm diameter / 12.5mm thickness). As such, Fossil removed the two extra side buttons, rotating crown and speaker to save space. Not having a speaker means it only vibrates for alerts, cannot be used as an independent music player, and lacks call features (cannot make and receive calls from the watch itself). The notification vibration was so soft that I could barely feel it, but there’s a setting to make the vibration pattern longer and somewhat easier to sense. Still, I’d have preferred sound. I find it works best if your phone has notifications turned on too so that you don’t miss them on the watch.

I came across compatibility issues with the software, but that’s more a reflection on Google Android Wear than Fossil. For instance, I listen to podcasts regularly and use the PlayerFM app. The sync between the watch and the phone kept messing up, and would lose my place in the program (starting over rather than resuming after a pause). I installed the PlayerFM app directly on the watch to see if that helped, but it didn’t. Ended up switching to Google Music’s podcast services and that works better. However, when I installed Google Music on the watch itself to gain full control, the podcast option was missing. Have to run everything through the phone. In essence, it’s best to stick to Google made apps if you can, but on the watch those get stripped down with missing features. Not to mention a lack of customization/settings.

On top of that, I found it did a poor job of speech recognition compared to my phone. On my phone, my words are almost always picked up correctly, whereas on the watch, it replaced some of my words with ones that were not even close. This is a big negative considering the watch relies on speech much more than the phone does. Makes quickly replying to a Hangouts message or email trickier. Thankfully there are basic responses you can select from a list such as “No” “Ok” and “I’ll be right there.” Best to stick to the phone for longer conversations, but it’s nice to shoot off a quick reply from your wrist when you can.

This watch is compatible with other 18mm straps. There’s an easy release mechanism on the band so you can remove it without the need for tools. However, you will need tools if you want to remove links in the band to make it smaller. I purchased an inexpensive 5-Piece Watch Band Link Pin Tool Set and it worked fine. Uncommonly, the pins can be removed in either direction, as arrows etched into the metal on the backside indicate (which makes things easier).

A replacement/extra Fossil Q Smartwatch Charger runs for $25 or you can get third-party charging docks for around the same price. Note it does not come with an AC outlet/wall adapter, so you need to plug the USB cable into a computer or other power source that you already own. You’ll need to charge the watch every day as the battery only lasts up to 24 hours, which means you’re likely not using it at night for sleep monitoring. Also note that the Q Venture does not support heart rate measurement. It does have a built-in fitness tracker that records steps, distance and how many calories you burn.

The watch cannot record video or take its own pictures, and for some reason it never shows photos sent in Hangouts (just displays text saying that your contact “sent a photo” — to view it you need to use your phone). The touchscreen has a full round display, removing the black bar at the bottom found on older 2nd Generation models. While the Q Venture is compatible with iPhone 6S (I use it on Android Marshmallow), it won’t let you text directly from the watch.

The watch has a water resistance rating of IP67, which means that it is fully protected from dust and can withstand being submerged in 1m (about 3.3 feet) of static water for up to 30 minutes. 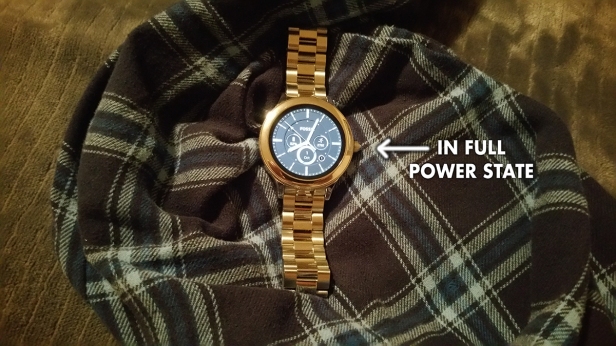 There are two display modes. A brighter display with full features (such as a moving second hand), and a dimmer stripped down version to save battery life. It goes to the dimmer version when the user is less active, but will quickly switch back with a twist of the wrist. I found the dimmer version impossible to see on a sunny day, while the bright version was fine unless in direct sunlight—where it gets washed out and barely visible on the screen. If you work outdoors and are in the sun a lot, this might not be the best option for you.

Overall, I find I really like this watch. I usually have about 30% remaining battery by the end of the day, it feels good on my wrist, and I like being able to glance at it to see my notifications (messages, emails, etc.) without having to dig my phone out of my pocket. To me, that’s the biggest benefit over a traditional watch. The “find my phone,” stopwatch, timer, and reminder features are nice too. Should you get bored, there are some simple games to kill time. I can see the translate feature coming in handy in certain situations (I live in Texas, and may need some Spanish from time to time). I also like the customizability of the watch face—such as having the weather, battery life and date on screen. I personally like Fossil’s classic looking one named “Machine” but should you not care for the options available, you can download others from the Google Play store. Just be sure to test them out first because I found a few that were not centered properly on the screen. While I wish this watch had sound, I like that it is slimmer as a result–making it unisex friendly.